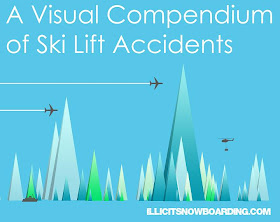 Other then the Olympics the only time that skiing and snowboarding really makes the news is when someone dies. The amount of press coverage is determined by a complex equation using variables such as; how old the people were, how famous they were, and more recently an obsession with whether they were wearing a helmet or not. But the factor that has by far the biggest impact and guarantees a veritable press frenzy is when a large number of people are killed or injured, and the most consistent and successful mass killer of skiers and snowboarders is the ski lift. Today we take a look at over sixty years of ski lift accidents using a couple of infographics…
The Timeline
click on the picture to see the full version...

The biggest accident by far is the Kaprun disaster of 11th November 2000, when 155 people lost their lives as a result of a fire on a funicular. It’s a very harrowing story and harrowing is certainly one thing these accidents have in common. Later there is a full list and description of the accidents if you want all the details, but there are a few that stand out because of their unusual circumstances and we’ve highlighted them in the infographic.

This is the only photo I could find of an F-84F in the French Air Force. 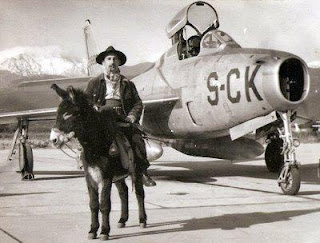 A Few Trends
click on the picture to see the full version...

Fatalities & Injuries
The five accidents with the greatest fatalities only one person was injured, and in the five accidents with the most injuries there were no fatalities. An interesting trend, but I’m not sure there is much to learn from that because you’d really want to avoid both types anyway.
Trends
For a tiny ski resort it’s incredibly bad luck that two of the largest accidents have occurred in Cavalese. Cavelese is like volcano waiting to erupt and it must almost be time for the lift to kill again. I’d give the place a wide berth next season.
Another thing to avoid at all costs is any lift with this sign.