How Dangerous Are Avalanches? - A Statistical Avalanche 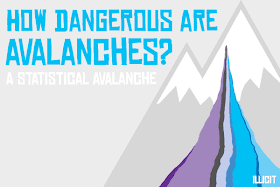 Over the last few weeks ESPN have been releasing some great articles on the effects of avalanches in the US. They’re now mid-way through a run of six articles and they’re also mid-way to scaring me into never snowboarding off-piste again. It’s time to take a look at the stats and see just how close to a horrible avalanchy death we really are…


The article that really got us started was the one called, ‘Is this the new normal? Why are more people dying in avalanches, and what can we do about it’. In particular these stats were the ones that gave us the hebegebees…
The 34 fatalities that occurred [last winter] in the U.S. comprised the fifth-highest total since 1950, according to data maintained by the Colorado Avalanche Information Center [CAIC]. However, last year was only the third-highest total in the past four years, falling short of the 36 deaths in both 2007-08 and 2009-10.
The eight highest U.S. avalanche death totals in recorded history have all occurred since 1995. In Canada, the 30-year-average number of fatalities from 1978-2007 was 11. In the past decade, that average has grown to 14.
Those are some pretty scary numbers. First thing we did was check they were accurate, because as we saw the other day that’s not always the case. The good news (or bad news) is that the numbers are accurate. The next question we had was whether the increase was just due to more people skiing and snowboarding, so we combined those specific avalanche fatality stats from CAIC with the participation stats we've used a few times before from the National Ski Areas Association (NSAA) to give us the figures for the number of avalanche fatalities per million participants over time. Here’s what we found… 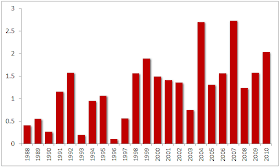 Even accounting for the levels of participation there's a very clear increase in avalanche fatalities. Shit.

So as there's been a noticeable increase, the next things we wanted to know is how much danger we're in. If you notice in that chart above,  for your average skier/snowboarding the chances of getting caught in an avalanche is very small. How does that compare to other activities? Here's where the CAIC site was very handy, they've got loads of stats (including the details of each accident which makes for some pretty harrowing reading) and they allow any punter to download the stats and have a play, so we did and here's what we ended up with... (Click on the picture if you want to see a larger version) 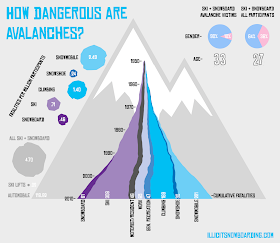 Here are some of the most interesting features of the chart:
1. On the top right there are some stats that show that the skiers and snowboarders that fall victim to avalanches are a good deal older than your average punter and they're mostly blokes. The ESPN article has this quote from Spencer Logan, an avalanche forecaster and the accident database manager at CAIC. "In the most general terms, most avalanche victims are male, most of them are in their 20s through mid-40s, and most of them are very good at their sport -- they're skilled skiers or snowboarders or they've been snowmobiling for a long time."  When we first started looking into this we had jumped to the conclusion that we'd see a fair few inexperienced nutters who were out of their depth getting caught in these numbers, but it's really not the case.

2. In the centre is a chart showing the cumulative avalanche fatalities by activity over time from the CAIC data. The good news is that you're less likely to be killed at work these days, but the bad news is that it's become a lot more common to die as a result of something you did in your free time. These numbers are interesting enough but but alone they don't tell the whole story; the next thing we wanted to know is which activity is more dangerous and that's where the boulders on the right come into play...

3. The volume of each of the boulders represents the fatalities per million participants and it gives a comparison of how dangerous each activity is. This was calculated by comparing the fatalities data against the participation data, this time from the National Sporting Goods Association (NGSA), over the past five seasons. Unsurprisingly of the activities on the avalanche list the safest was snowshoeing, so if you want to be sure to live to a ripe old age then that's the sport for you. Snowboarding was safer than skiing so that's a relief for us from a purely selfish standpoint, but by far the most dangerous activity was snowmobiling. It shouldn't have come as a surprise really, because if you spend just a few minutes on YouTube you'll be deluged by videos like this...

"Everybody hear how loud I'm﻿ breathing? ...That's because I just shit my pants"

Snowmobiling is a sport that is specifically designed to rapidly transport you in to the most dangerous situation possible. It's the closest experience you can have right now to being a space-farer in a tight red suit taking an unwelcome trip on a teleporter. It's so dangerous that a good chunk of the Wikipedia article about it is dedicated to the numerous ways you can die, something you don't see on the snowboarding page. Here's a few examples from a much longer list.
In areas they are unfamiliar with, riders could crash into suspended barbed wire or haywire fences at high speeds and each year a number of serious/fatal accidents have been caused in this manner. Each year, riders are killed when they hit other snowmobiles, automobiles, pedestrians, rocks, trees, fences, or when falling through thin ice. Fatal collisions with trains can also occur when a snowmobile operator engages in the illegal practice of "rail riding", riding between railroad track rails over snow covered sleepers. Inability to hear the sound of an incoming train over the engine noise of a snowmobile makes this activity extremely dangerous.


If you still need more convincing have a think about this; the first snowboard was a small plastic toy for kids called a Snurfer, the first snowmobile was this...

4. Just before we finish with the infographic there are a couple of other boulders on the left. We put these in to give the dangers of the activities we've been talking about a bit of context against other things you might be spending your time doing. We took a look at the dangers of ski lifts in an older article and you can see here that these contraptions are seriously safe. The big grey boulder is your chances of dying during your average bit of skiing or snowboarding and that figure is a bit more worrying, although to be fair the avalanche stats are compared against all participants not specifically against people who are more likely to be in danger like backcountry snowboarders/skiers. Finally the volume of the whole mountain in the background is the relative chances of dying in your bog-standard automobile accident, an activity so dangerous that they use a different scale when reporting them. You're significantly more likely to die on the way to or from your day of snowboarding than you are when you get there.

So there's a look at the data and it makes avalanches just a little less fearsome, but bear in mind these stats are for your average person, if you find yourself just about to jump out of a helicopter in Alaska your odds will be somewhat worse.

The ESPN series on avalanches

Our infographic on ski lifts putting some context into some more tragedy.

For anyone that thinks snowmobiles are a bit too soft for them, here's our guide to snowterbikes.