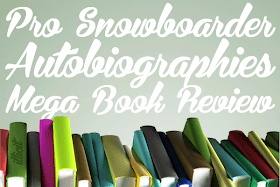 This week we review every single pro snowboarder autobiography ever written…
We found four. 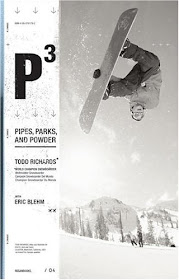 And it’s a good one. To give you a sense of what you’re getting let’s start with an extract from the book about his first trip to a high altitude resort (Arapahoe Basin at 13,500ft), where he rocked up at an event on his second day in the resort with altitude sickness and sun poisoning:
By the time I made the finals, I had a lot of gas from the altitude sickness and was polluting the air around the starting area. To top it off, the event was televised, which was a big deal. The World Championships in Brek had been on television earlier that winter, but camera crews were still a pretty rare sight back then. At this event, most riders, myself included, were acutely aware of the big cameras that were constantly trained on us. Here’s what I later watched: Me poised in the starting gate for the finals. The camera zooms in on my severely charred face, and the voice-over says, “Here, we have Todd Richards from Paxton, Massachusetts, riding for Sims.” I look around briefly. Then I stop, stare upward into space for a second with this look of confusion, then my face wrinkles up into a grimace.
That was the exact second I shit my pants. Just blew out, spackling the inside of my magic purple Sims jumpsuit. The announcer said, “Go!” and I didn’t have a choice. I dropped in and dealt with the load in my pants. It’s a good thing I semi-blacked out during my runs or I might have realised that my pants were filled with poop soup and all the tweaks and handplants were spreading the love, so to speak. Despite the gross factor, I pulled all my tricks and straight-lined it to the bathroom.

He came fifth if you were wondering. It reminds me of this video.
The book is really well written and the guy has some interesting shit to tell. You come out of the experience thinking he’d be a good lad to go to the pub with (and that’s universally recognised to be the most important character reference there can be). The only downside to the book is that it was completed just after the deaths of Craig Kelly and Jeff Anderson, so the book ends on a sad note. It’s a bit of a heavy way to end what was otherwise a light-hearted tome, but it still makes for interesting reading. It gets a definite recommendation from us and you can get a hold of a copy in this little boutique book store. 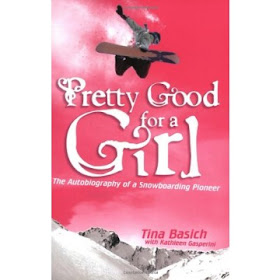 Tina Basich was one of the pioneers of women’s snowboarding and the book gets off to a promising start with the first page including the phrase, “I’d get so nervous, I’d pee in my leotard”. If these books are any guidance than clearly if you want become a pro snowboarder a flare for soiling yourself in public is a must.
Other things I learned:
1. She believes in fairies.
2. When she won the slalom at the OP Pro, Squaw Valley in 1990 she made her arm guards from a Dominos pizza box. Classic snowboard bodge.
4. Dave Grohl is a confirmed snowboarder
5. Dave Grohl is also actually a bit of a dick
The book is all a bit too earnest and straight down the line to make it a great read for most people. It was written for teenage girls, hence the pink cover, swirly design throughout the book and the interspersed tips on snowboarding for newbies which includes the advice to never wear an underwire bra when snowboarding because “crashes cause boob bruises”. Despite being completely the wrong audience I still found the book to worth a read, particularly the insights it gave into what the life of being a gender pioneer in a largely male dominated sport. Get a dose of Tina's book here.

Then there’s Ross Rebagliati’s - Off the Chain
It’s the story of the first snowboarder to win and Olympic gold medal, then lost it after testing positive for marijuana, but got it back again when someone pointed out that marijuana wasn't actually on the banned substance list. A couple of years ago in an article about the Olympics I mentioned this book and wrote, “It would be interesting to see how much of that book is dedicated to his gold medal”.  The answer is; surprisingly little and probably not enough. Considering this is the moment that defined what most people have heard of Ross Rebagliati and why they might pick up his book, it’s amazing how little detail and insight you get into the events and after effects of his Olympics experience.
Here are three interesting things I did learn:
1. He didn’t qualify for the Canadian Olympic team initially after he chose to skip some of the qualifying events to race on the European tour. When he found out he procured a dubious doctor's note to say that he was injured and that’s why he missed the events. With that note and an apology and he was allowed back on the team and bumped out the lad that had originally been given the place.
2. He found out after the Olympics debacle that he had actually failed every single drugs test he’d taken in the lead up to the event. It’s really strange, given that history, that the testers only decided to out him at the Olympics.
3. Because of the Olympics incident he found his way onto the US list of undesirables and post 9/11 he wasn’t allowed into the US under any circumstances. Eventually he was allowed in if he underwent strip search each time, but he wasn’t allowed to fly. That bureaucratic nonsense effectively ended his snowboard career, which is a shitty way to go.
Interesting stuff, but unfortunately you don’t get much more detail from the book itself, which is a real shame. Instead what you get is a strange mix of a cursory snowboarding history interspersed with snowboard tips (number four in his top ten best bands to listen to when boarding is “any reggae artist”) and Rebagliati’s autobiography. It’s a very light read with most of the volume being photographs and it didn't take long to get through it. It was all just a little meh.
Example passage:
When I was about six years of age, I had a dream. It was one of those dreams that stays with you, refusing to ever fade. It was one of those dreams that shows you something about yourself, and then refuses to ever let you forget it. Most days, I still think of it.
I was at the start line of some sort of swimming race. There were bleachers at the side of the pool, and they were filled with spectators. The other competitors were all much bigger than me, and I could tell they were all much better swimmers than me. The whistle blew, and I began swimming. As I struggled to keep up, arms thrashing in the water, I looked up and noticed that all the spectators had turned into judges. Suddenly, they were dressed in long, dark robes and the huge fake wigs the British magistrates wear. They were all pointing and yelling. Not at the other swimmers, but at me. As the race wore on, and I struggled and splashed my way to the other end of the pool, they yelled louder and louder, their faces red with anger.
I woke up, my heart pounding.
I’ve never totally understood the meaning of this dream.
He’s no Martin Luther King. That was the first few paragraphs of the book and if you want to read the rest it's available here.

Finally it’s Chris Klug’s - To the Edge and Back 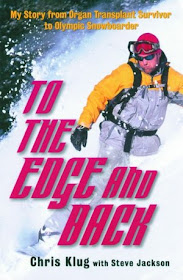 Chris Klug is the least well known snowboarder to churn out an autobiography. Like Rebagliati he was a slalom racer, like Rebagliati he won an Olympic medal, unlike Rebagliati he wasn't caught smoking dope so that's probably why you've never heard of him. Despite his relative obscurity he has managed to produce and excellent book because there’s no one in snowboarding that has anything like this guy’s incredible medical history. We reviewed this book in detail a while ago, so to summarise... 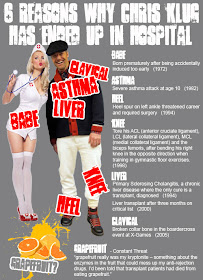 Like the other autobiographists Chris Klug started snowboarding back when people were using snowboards cobbled together out of wood, string, duct tape and hope, and he reached his peak when snowboarding became an Olympic sport. All these books cover elements of the history of snowboarding through the particular story of the author, but what adds an extra element to Chris Klug's book is the story is his liver disease and transplant, and the charity work he's gone on to do. That extra element makes for a really strong read even if you're not into snowboarding, and it's the stand out book because of it. Here's the book.

The Verdict
If you fancy reading your way through some snowboarding autobiographies or are looking for a Christmas present then here’s the order you should go for:
1. Chris Klug
2. Todd Richards
3. Tina Basich
4. Stop there.

Considering the number of people who have been involved in snowboarding over the years four autobiographies might seem to be a surprisingly limited output, but what’s really odd is how all the autobiographies were written by one very specific generation of snowboarders. Some of the elder statesmen of the sport were born in the early 1950s (Tom Sims - 1950, Jake Burton - 1952) and some of the most recognised snowboarders today were born in the late 80s (Shaun White - 1986). That’s about four decades of snowboarders, but the four pro snowboarder autobiographies here were all written by people born within just three years of each other. Tina Basich (1969), Todd Richards (1969), Ross Rebagliati (1971) and Chris Klug (1972). There is a little room to expand the genre, and the news on the street is that there’s going to be a new addition next year...Terje Haakonsen (1974).

We did a much more in depth review of Chris Klug and his book a while back and it's worth a read if you're still undecided.