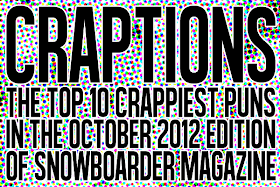 It's sometimes said that puns are the lowest form of humour, but for years I've argued that the dubious honour should actually go to the likes of anagrams, pranks, mother-in-law jokes, slapstick and Garfield. At least that's what I believed before I picked up the October edition of Snowboarder Magazine on my last trip to the US. Here are the ten lowest points, in a new low point, for the now proven lowest form of humour...

In the October edition of Snowboarder Magazine there were an incredible 72 puns and over 90% in the photos on the magazine had been embossed with one. Given that they churn out 8 editions and it probably takes about 10 minutes to craft, edit and format each pun; that's 5,760 minutes, or 96 hours, or 12 working days Snowboarder Magazine dedicates to punning each season. Was that a good use of time? You decide.

6a.
The same pun, the same magazine and the same snowboarder.

10.
No. From the unremitting plethora of weak puns I'd assume Snowboarder Magazine is kinda square.

On the plus side and just to prove that if you throw enough shit at a wall some of it will stick, on page 121 we found a good one. Together with the other two good captions that made a hit ratio of 4%...

Here are a few handy tips on pun and caption writing that are worth considering for the rest of the season: