What’s Wrong With Snowboard Movies? - The Tyranny of ‘The Format’ 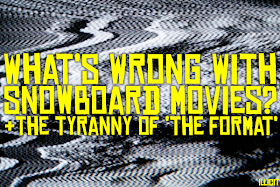 Can you guess which snowboard video this describes?

Sound familiar? It should do because it roughly describes almost every single snowboard movie ever created. It’s what, for the purposes of this article we are going to call ‘the format’. ‘The format’ has been the dominant type of snowboard movie for over twenty years, and it’s been copied and rehashed to a point well past it’s sell by date. We've reached a situation where there’s now a whole generation of snowboarders that don’t know anything else but ‘the format’ and because of that it’s become even more pervasive. Is ‘the format’ something all snowboard movies are doomed to repeat forever or is there another way?


Way back at the start of snowboarding things weren't like this. No one knew how to make a snowboard movie and people were trying all kinds of different things. Some were admittedly incredibly shitty, but some were inspirationally bonkers. This is one of the first dedicated snowboard movies, Apocalypse Snow from 1983, bathe in its glorious madness.

After years of people muddling around trying different ideas with varying degrees of success, ‘the format’ was first introduced by the likes of Mack Dawg Productions and Standard Films. In the 90s these two companies dominated snowboard films and the format that they showcased was easily the best way anyone had found to produce a snowboard movie at that time.

Seeing the success of these companies other people wanted to get a piece of the action so they started to copy ‘the format’. Within a short space of time almost all movies had started to follow the rules and by the turn of the millennium it was hard to tell them apart. Once ‘the format’ had become ubiquitous the differentiation or success of individual movies was now down to subtle differences, like the snowboarder line-up, the places visited or the style of soundtrack.

That process has been repeated time and time again with minor tweaks for years. Even the single biggest change to film making of our time, the move to digital and the production explosion that followed, made no impact on this trend of rehashing ‘the format’. With the move to digital the ability to produce a snowboard movie was suddenly open to thousands of more people, but being brought up on ‘the format’ these new movies were just more of the same.

Some of these movies are excellent by themselves, but once you put them into context with every other snowboard movie ever made they start to look very similar:


I’ve just picked a few out here but have a go yourself, are you experiencing the same thing?

The movies I've mentioned are all good snowboard films, but for every one of these there are ten less memorable movies that also follow 'the format' and it all becomes a bit of a blur. Just having a quick look through my, not very overwhelming  DVD shelf, I have absolutely no recollection of anything that happened in about half the movies I watched last season. Making a snowboard movie these days is not a good way to make money and one of the main reasons is because there’s nothing different enough about them that would make anyone want to go out of their way to buy them. Why buy the latest release when you'll be able to watch something for free that will be so similar you’d hardly notice the difference? It’s like trying to flog someone a South Korean dance music song, when all they have to do right now is be unfortunate enough to have ears. ‘The format’ that was once so fresh is now very, very stale.

So that’s the problem, what’s the solution?

The solution is to do something really different. If you haven’t already watched it, here's a free movie you can watch right now. If you want to cut to the chase head to the bit at 7mins 34seconds.


For the most part it’s also yet another outing for ‘the format’, but what did you make of the crowdsourced bit? It’s probably makes you feel a little tingly like you last experienced during the Apocalypse Snow clip. That’s the feeling you get when you see something different. Even the guys who made Pepping shared the feeling, and although it’s only a tiny bit of the whole movie, and despite the movie including some banging riding from the pros, they still highlighted this small part as the best bit. Now imagine if someone did a whole crowdsourced movie like that. That would be something different and something I’d pay to see.

There are a few movies that are worth holding up as examples of how things can be done. While all around them people were following ‘the format’ over the years a few people have tried doing the opposite.

There's a few examples of people who have done things differently, but there's loads more room for others. At the moment it's like everyone is scrabbling to produce halfpipe movies and trying to be Shaun White, when there's still lots of opportunity for someone to try and to be the Travis Rice, Terje Haakonsen, Kelly Clark, Tom Sims, Nicolas Muller or the Jeremy Joneseses of movies.

Here’s a few other things that could be tried: a Jackass inspired snowboard movie, a movie with a plot, a comedy, the snowboarding equivalent of Touching the Void, a travelogue, a movie about how global warming might effect snowboarding and skiing, a period drama (snowboarding is surely crying out for one), a really fucking artistic movie, an animated snowboard movie, a movie about the world’s fastest snowboarder no one’s ever heard of, get someone funny to do the interludes, a whole move of slams fronted by Mr T, an all buttering movie, go somewhere fucking weird and film the weirdest bits, a documentary about the guys that snowboarded down Mt. Everest, a movie about life in a resort, set-up an urban jibbing competition in a ski resort without asking permission and film it. You get the gist. If you’re about to make a snowboarding video, have a think about what’s going to make yours different. If everybody else is doing one thing do the exact opposite and there’s a good chance it will work, the market is gagging for something new.

On that note, this looks like it could be interesting

Here's a look at all Hollywood's attempts at producing a snowboard movie. (at the time we did it, apart from the ones we missed that people pointed out in the comments and not including the MXP: Most Xtreme Primate one we posted on Facebook the other day)