The Dirty Protest & How many socks do you really need? 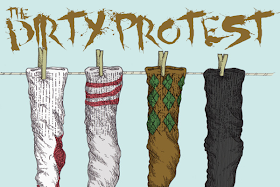 This season I've been doing some colouring-in to help fill the pages of Whitelines magazine, so for the first time this stuff is being looked over by the terrified eyes of some professional editors. It's been a interesting process and at times things have become very heated as it did with my latest spread. Today I'm going to reveal all and show you what really happens behind the Wizard's curtain...

Happy New Year Illicit, hope you had a good one.

How's the piece for the next issue looking?

See what you make of this. No mega LOLs this time, but I thought it was an interesting thing to graphic up.

This is ace - just noticed that the price for the helmet is different in the pic and in your closing text.

Some smart arses might look at the lack of board in the first section and think "how can you ride without a snowboard?" Obviously, you mean they could rent, but could be worth adding rental cost in there somewhere, or (to counter the first issue at the same time) give the sections different names e.g. "The Rent Boy", "The Keano", "The Excess Baggage"

I don't care about the words, it's just nice to look at.

Good feedback. I felt it has the same problems, but I was too arted out by the time I got to the wording to find a good solution. Liked your naming idea. Does this scan better?

I've fixed the helmet pricing too.

I'm glad you put "a bit more final" for the filename cos I just clocked something else. :)

As it stands you've suggested the keen shredder buys an extra 2 thermal tops (total 3) and 5 socks (total 6). Maybe we're skanky here at WL but even though we get lots of stuff free none of us take more than 2 sets of thermals and 3 pairs of socks on a strict rotation. Could you reduce these down accordingly?

I would have to redo all the maths, which means we really have to be sure for me to go to the trouble of making that change.

Aside from that though, why don't you take more socks? They take up next to no space and it sounds like you have plenty of spare pairs lying around. You're strange sock rationing cult at Whitelines sounds a bit weird to me.

I used to share a room with a lad that would rotate a single pair of socks on a permanent basis… We don't talk any more.

Ah but if they're Christmas presents, then surely it doesn't matter how much they cost? No-one's gonna buy more than 3 pairs are they?

You still pay for them. It feels like you’re buying a scarf for your mum, but you're really just over-paying for some crappy ski socks. I should probably be putting the prices up if anything.

Fair point, although I've still never met anyone with 6 pairs of snowboard socks. There have been many times when I wish I had.

I wore the same thermals for 14 days straight last year with only a quick shower rinse out along the way. And in the spring too haha.

That makes me glad we were only staying with you for the first 7...

Which is why I wouldn't recommend anyone copy my own first season, in which I used one pair for the entire winter *without* washing. In the end I believe they began to clean themselves, like dreadlocks. On the other hand you could hold them out straight and they wouldn't bend. They kind of doubled as divining rods...

OK guys. I'm giving in and taking on board your dirty protests so I've made the change.

I was only just brought up to speed on this chat so instead of in gentle stage my mind was blown in one go. SIX PAIRS OF SNOWBOARD SOCKS! WTF?! I did a whole season with just the one pair, admittedly my house mates didn't enjoy it too much but I found a quick rinse whilst I was showering every other day was enough to keep them from crawling away.

Still using the same pair actually, four years later, though I now own two other pairs. Which I paid for. And that's more than sufficient for actually living out here.

I'm still not talking to you Sam.


And that my friends, is how snowboard magazine editing works. At first the one thing I found odd about the Whitelines editorial set-up was that they all work remotely; Ed out west, Duthie in Scotland, Tim in London and Sam in the Alps. After this email exchange I now understand why they can't stand to be around each other. Stick these four guys in an office and it would be a gas chamber.

Which leaves us with the big question…How many socks do you rock?