Where Are Snowboards Really Made? Illicit Investigates... 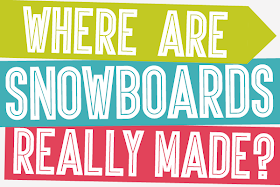 Strange fact: The majority of snowboards are not built by the snowboard brands. That's something most snowboarders aren't aware of and most of the companies keep very quiet about. It's all about as transparent as an internal FIFA inquiry, so we thought we'd try and figure out exactly what's going on and shed some light on it...

Over the past few weeks we've been hacking away in the depths of the internet and interrogating industry insiders to try and build up an accurate picture of what is really happening, who actually builds the snowboards and where are they made.Here's what we found.

The things we learned along the way


What are these factories?

Most snowboards are not made by the snowboard brands we're all familiar with, they are often built by completely separate companies known in the business as Original Equipment Manufacturers (OEM).

Why you probably haven't heard of these OEMs before

Most people will never known that their board was made by an OEM. The OEM will not leave their name on the product, OEMs have no interest in promoting themselves to the public because they don't sell directly and in most cases the OEMs are contractually obliged not to publicise the brands they are working with.

Having their boards produced by an OEM is not something most snowboard brands want to make a big deal about either. There's a stigma to not producing your own boards which means that even the big brands using these methods are reticent to tell people about it.

As it's not in the interest of either the OEM or brand to be transparent about their relationship it's really difficult to find this information. There may be some errors in our list as a result, despite the amount of digging we've done to get this far.

To complicate things a little further, some brands can use more than one OEM to produce their boards. They can use one OEM for high-quality boards and one for low-quality.

Some brands may have a small factory of their own (which they'll proudly tell you about), where they produce the high-end boards, but their mass market boards are then produced by an OEM (which they won't really mention).

Brands can shift production from one OEM to another within weeks. This happens surprisingly often and it makes it difficult to track accurately.

One reason for the frequent shifts is that OEM factories work on small margins and are very susceptible to going out of business when they hit financial difficulties. For example, the Elan OEM factory in Austria used to be one of the world's biggest manufacturer of snowboards until they went went bankrupt in 2013.  At the time they were producing snowboards for the likes of, Arbor, Apo, Amplid, Bataleon, CAPiTA, Dinosaurs Will Die, Lobster and Rome. Most snowboarders didn't even notice the loss of Elan, because those brands were able to quickly source other OEMS with limited or no impact on their production.

Another reason for the quick moves between OEMs is that some brands own the machinery the factories use, which allows them to shift to another lower bidding provider even quicker.

Using an OEM is not necessarily bad

Snowboard companies are experts at designing snowboards but manufacturing is another skill. The really good snowboard OEM factories can be much more efficient and produce a consistently higher quality of product than one run by a non-specialised company. It's the same reason why the snowboard brands use shipping companies to distribute their boards rather than doing it themselves.

To produce quality snowboards on any sort of significant scale you've really got no choice but to use a specialist. That's why all the biggest snowboard brands use OEMs.

Using an OEM badly can be terrible.

What gives OEM a bad name, and why there is a stigma associated with it, is what happens at the other end of the scale. There are a number of smaller brands or zombie brands who take no part in the design or development of the snowboards. They just order off-the-shelf designs from the OEMs with their logos added. They are only really graphics companies masquerading as snowboard companies and it's in the interest of those brands to hide their relationships with OEMs. Unfortunately while the legitimate companies also lack transparency it allows these shonky brands to blend in with the masses tarring the whole lot and making it very difficult for snowboarders to aviod them.


Building it yourself is not necessarily good.

Because some OEM/brand set-ups can be so bad, any company that makes it's own boards will use that as their main selling point. However just like there's a huge range of quality in OEMs there's a huge range of quality in self-build too. It's not as simple as saying if you build it yourself it's better. Some of these brands will be producing very high quality boards but others can just be a geezer in a garage, using a vacuum press, producing crappy snowboards and offering no warranty.

Made in China isn't the problem

There's always a lot of discussion about the quality of snowboards being made in China, and how this should be the thing to avoid.  However, just like any other country Chinese built snowboards can also be really bad or very good. Here's the guy that runs Endeavour talking about how they work:


It would be nice and simple if something like 'Made in America' could be used to signify a quality boards, but again it's a range. The companies featured in this chart that build in the US do produce quality boards, but there many other brands built badly in the US either by the brand or by US based OEMs. We've covered this before in our story '11 Brands, 1 Snowboard (and a $270 price difference)'

There doesn't seem to be a lot of correlation between the country the snowboard is made and the quality of the product.

Transparency seems to be the clearest way to separate the wheat from the chaff.

The more transparent the brand is about how their boards are produced, the better the quality of snowboard you'll get.

Jones snowboards are a good example of how this can be done. Like a lot of other companies they've chosen to have their boards built by an OEM in Austria, but unusually they've decided to be honest about it. They can produce a better quality board in a more sustainable way using this method than they could by building it themselves. There is a page on their website that clearly explains some of their reasoning for that decision. They could even have gone further to share more about the development process and how GST works and they wouldn't go wrong. Instead of being punished for Jeremy Jones not personally constructing each board by hand, or for him not building them in his home town, people recognise the open and reasoned approach of that company and and it's growing rapidly.

Some more on those unfamiliar names

CAPiTA MFG (C4future GmbH) based in Furnitz, Austria. CAPiTA acquired the old Elan factory and the brands are in the process of returning.

Keil Ski  based in Uttendorf, Austria. Burton have an agreement with their partner that they have to exclusively produce Burton boards. The last people Burton worked with in Poland couldn't make enough money from only supplying Burton and lost the business as a result. Keil make the mid to high range Burton boards.

Amer Sports  The corporation that owns Salomon along with a number of other companies, has a number of factories around Europe and Asia. There's more about them in the Faceless Corporations link at the bottom of this article.

Swiss Lab Factory Part of the Nidecker Group. Nidecker's manufacturing arm hit troubles a few years ago, they closed the Tunisian factory they had and the Swiss factory has now been split out as a separate company. Nidecker also owns or part-owns Jones, YES and Slash but those brands have not been forced to used the same OEM.

NBL Sport (Nobile) These are the guys that used to make Burton boards.

Unknown Doesn't matter how much research you do, some of the things that go on in China stay in China.

SWS (Solico Winter Sport) was set-up in Dubai by a couple of guys that used to work in the Elan factory. There's an interesting interview with them here.

Mervin  The name of the company that owns both the Lib Tech and GNU brands.

Meditec  The old factory Nidecker used to have in Tunisia. They only have a Facebook page featuring a few photos of naked women. Posters of naked women are the universal wall paper of snowboard factories.


Edit: StepChild is Canadian, not based in the US.
Edit: The Burton OEM Factory in Austria is Keil Ski

The Faceless Corporations That Run Snowboarding